The NASA Seal in a multi-layered stainless steel design. The name "NASA" and the orbital ring are finished in white and the chevron symbol is finished in Vintage Red. The Vintage Blue layer has planets and stars laser etched from the blue finish. The base layer is our signature Vinatge Steel finish.

In the NASA insignia design, the sphere represents a planet, the stars represent space, the red chevron, in the alternate shape of the constellation andromeda, is a wing representing aeronautics (the latest design in hypersonic wings at the time the logo was developed), and then there is the orbiting spacecraft going around the wing. It is known officially as the insignia.[

The NASA seal was approved by President Eisenhower in 1959, and slightly modified by John F. Kennedy in 1961. 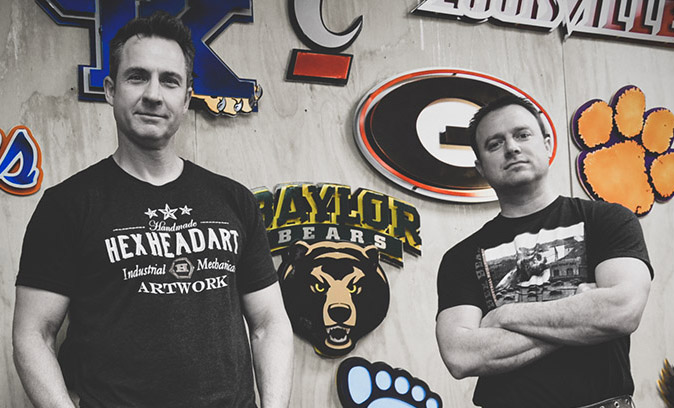 Jamie Watts and Cory Lay have been in business together for over 15 years.

"I personally guarantee you will absolutely love your new piece of artwork."  Cory Lay